Z by Z is the sophisticated pop vehicle of Brooklyn based singer/songwriter Harrison Z. Cohen. Cohen grew up in New York’s Hudson Valley on a healthy dose of the outdoors, Wes Anderson, and Impressionist art. His music is inspired by pop and alternative artists like Maroon 5, Arctic Monkeys, Vampire Weekend, Phoenix and Spoon. Cohen debuted his original song “No Time” as his audition for season fifteen of American Idol, for which he received praise from Keith Urban and Jennifer Lopez who commented, “I really liked it, I felt like I could hear that song on the radio.” As a music industry student at Drexel University, Cohen continued writing and performing his original music at house shows, colleges and cities across the East Coast. In 2018, he began releasing his original compositions as Z by Z, to which he has amassed over one million Spotify streams, has been added to over 35K+ user playlists, and has racked up numerous spins on New York’s WFUV and WXPK. Z by Z is releasing a wave of new music produced by Nick Krill (The War On Drugs, Clap Your Hands Say Yeah, Generationals) featuring guitarist Russ Flynn (X Ambassadors), bassist Gary Atturio (Darwin Deez, A Great Big World) and drummer Zach Jones (Sting, Elle King), sounding better than ever. 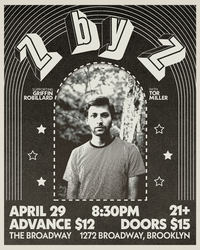 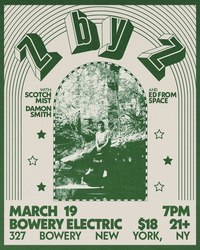 “Z by Z made waves with his powerful hit 'Searching' when it first hit the music scene over two years ago, and now, with the new unplugged version of the track, we believe we're about to see its renaissance.” - Amanda Mcarthur

“With his motivated spirit and contagious positivity, Z by Z is making his mark, proving himself to be one of the next rising pop acts of the current moment. ” - Natalie Brodnick